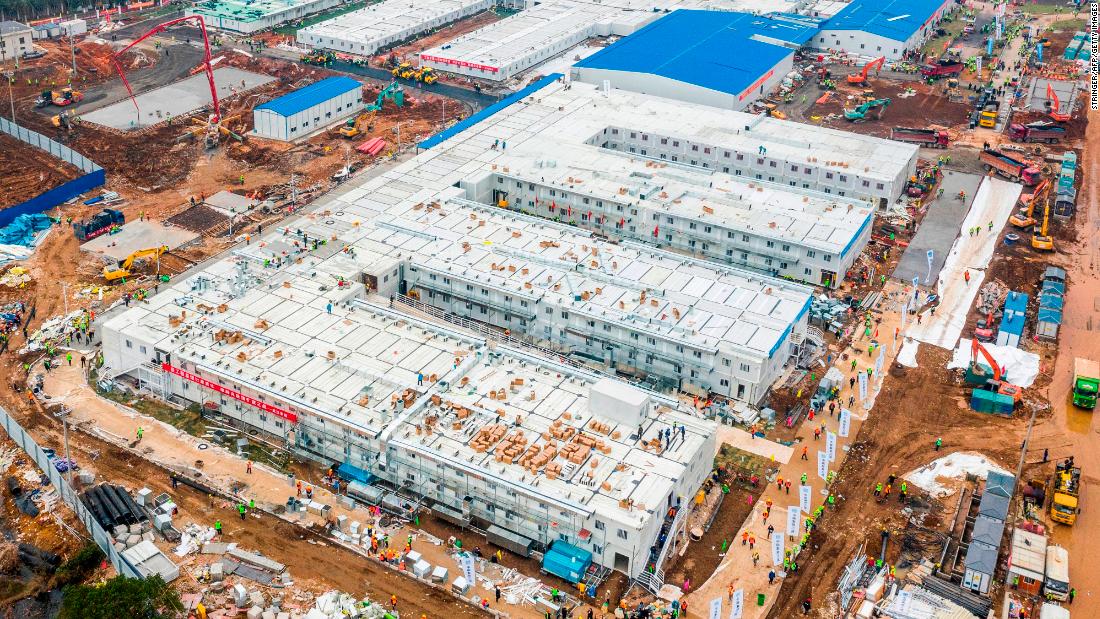 Hong Kong (CNN)As China races to contain the Wuhan coronavirus, a feat of design and engineering has unfolded at the outbreak’s epicenter: A hospital built in just 10 days.

The two-story, 366,000-square-foot Huoshenshan Hospital began accepting its first patients Monday, a little over a week after land-levelling work commenced. A second, Leishenshan Hospital, is

soon, with the two facilities expected to accommodate 1,000 and 1,500 beds respectively.

Authorities hope the hospitals can help relieve pressure on Wuhan’s overburdened healthcare system, while controlling the spread of a virus that has killed more than700 people and infected over 31,000globally.

The scale and speed of construction has been made possible with pre-fabricated units and thousands of workers operating through the night. When it comes to design, however, the hospitals had to be largely started from scratch, according to a source at the company involved in the first facility’s architectural design.

that the buildings were modeled on Beijing’s Xiaotangshan Hospital, a facility built in 2003 in just seven days, during the SARS outbreak. But according to CNN’s source, who asked not to be named due to the project’s sensitivity, the design itself could not be copied like for like.

“We re-designed the whole thing — we couldn’t use (the blueprint for Xiaotangshan) directly,” he said on the phone from the construction site in Wuhan, adding that “terrain and design conditions are all different.”

The Wuhan government has published information about what they claim are a number of design features of Huoshenshan Hospital, such as the use of negative air pressure to ensure that ventilated air flows into, but not out of, isolated wards.

At present, the effectiveness of the new hospitals remains largely untested — and some observers have raised questions about their overall functionality and safety.

On Monday, state-run newspaper Changjiang Daily reported that authorities in Wuhan was building

into existing spaces, including a stadium and exhibition hall — all of which may require their own individual blueprints.

So how do you go about creating, in a matter of days, a large-scale field hospital that can in theory, prevent the virus from spreading beyond — and within — its walls?

Emergency medicine physician Dr. Solomon Kuah helped the International Rescue Committee coordinate the construction of emergency hospitals during a 2014 Ebola outbreak in West Africa. Although the resources available to him at the time meant that 100- to 200-bed field hospitals in rural Africa would take a month or more to construct, many of the underlying design principles for building makeshift hospitals will be much the same, he told CNN in a phone interview.

Perhaps most important among them is the “cohorting,” or zoning, of patients — grouping people based on the level of risk they pose, said Kuah, who had been watching the construction of Huoshenshan Hospital via an official livestream.

“You might have one wing where people need to confirm whether they have (the virus), and another where they’ve all tested positive,” he said. “So within the facility people are ‘cohorted’ based on how suspect they are. Then, you can sub-cohort by, say, pregnant women, or people waiting for test results, or those waiting for (a quarantine period) to end.”

So while the Wuhan government has said that only patients confirmed to have contracted the virus will be admitted to Huoshenshan Hospital, patients may still be divided based on the risk they pose. Aerial photos of the facility, taken during construction, show long rectangular wards spilling out from a central axis, and otherwise completely separate from one another. A second, smaller cluster of structures appears entirely disconnected from the bulk of the hospital.

This layout could reflect that wings of differing levels of contagiousness, for instance, are being isolated from one another to prevent cross-infection. They would also, ideally, be divided from central areas by disinfection facilities, Kuah said — especially if doctors are working across different groups of patients.

These disinfection zones may also be used to separate wards from the operational command center, from which medical staff will likely coordinate care. Perhaps counterintuitively, this kind of operational hub would likely not be at the center of the building, Kuah said.

“You want your command center to be as low-risk as possible. So you don’t want it in the center of things, and it’s not going to be near the exit of the ‘confirmed’ patients’ ward,” he explained. “For the operation center you want (healthcare) providers to be completely out of their personal protective equipment, because they’re very uncomfortable to wear.”

Reducing patients’ movement within the hospital will help ensure that high-risk individuals don’t come into contact with others. Yet, it is inevitable that infected patients will sometimes need to move — in order to access toilets, for instance. Medical staff, too, will constantly need to travel through the facility.

in Changjiang Daily suggests that Huoshenshan Hospital abides by a principle it calls “three zones and two channels” — the division of clean, semi-polluted and polluted areas, plus the creation of two separate channels for medical staff and patients to walk through.

When planning for these human flows, Kuah said that it’s also essential to think about the space between patients, corridors and facilities — and to erect barriers between them. But even for contagious viruses, the safe distances required may be smaller than one might expect.

“Droplet-type viruses — like coronavirus or Ebola virus — don’t float around,” Kuah explained. “They won’t float up a 10-foot wall and come down on the other side. Any droplet that is projected forth (from a patient’s mouth) can only go so far.

“We’d have two barriers: a ‘dirty’ barrier and a ‘clean’ barrier,” he said of the Ebola hospitals he worked on. “The clean barrier would be on the side of staff members who weren’t infected, while those who are suspected of having — or are confirmed to have — the disease are on the other side of the dirty barrier.

“The distance between those barriers, if there was a free-flowing corridor, was 1 meter (3.2 feet). Because even if (an infected patient) speaks, there is no way your droplets would go any further than a meter before falling to the ground.”

The material used for these barriers isn’t especially important, he added, as long as they can endure chemical cleaning. It’s also important to clearly mark entrances and exits, to ensure that people flow through the building in the desired direction (doctors, for instance, should ideally start their rounds in low-risk areas first, Kuah said).

There will be countless other logistical considerations built into the design, from deliveries and patient transfers to storage and ventilation. According to the Wuhan government, other facilities in the hospital include a medical technology building, a network computer room, a central supply warehouse and an ambulance decontamination room, among others.

Water and sanitation systems can also be “one of the most important measures of controlling cross-infection,” Kuah said.

“In creating an Ebola isolation unit, we would not borrow any water sources, or drain into (water systems of nearby buildings),” Kuah explained. “You create an all-inclusive system in your facility — it doesn’t cross into any neighboring infrastructure.”

Retrofitting such systems into existing hospitals may prove impossible. So while facilities like Huoshenshan and Leishenshan may seem like desperate attempts to control an epidemic, they could actually be better equipped for the job than Wuhan’s existing facilities. Crucially, Kuah explained, they can keep infected patients away from those who need to seek medical treatment for other reasons.

This may prove lifesaving, given that people with other conditions, or comorbidities, appear to be especially at risk from the Wuhan coronavirus.

“If you don’t start separating people, then you’ll have a young, healthy 20-year-old with novel coronavirus sitting next to a 65-year-old gentleman who needs his heart checked on,” Kuah said. “The main hospitals want to continue to be able to do what they normally do. Those burdens will still exist within the city.”

So while comparatively rudimentary, these field hospitals serve a very different purpose from standard medical facilities, Kuah said, adding: “You don’t need to reinvent the wheel every time.”

How Much Internet Speed Do I Need? – Let’s Talk Details

Who Do You Trust? Trophy in Resident Evil 5

Can you solve it before we do? Trophy in LEGO DC Super-Villains (EU)

Why Do You Want to Be Famous?

Why Is Progressive So Cheap? 5 Big Things To Know (Quotes)

What Is Classical Conditioning? (And Why Does It Matter?)

I-864W, Request for Exemption for Intending Immigrant’s Affidavit of Support