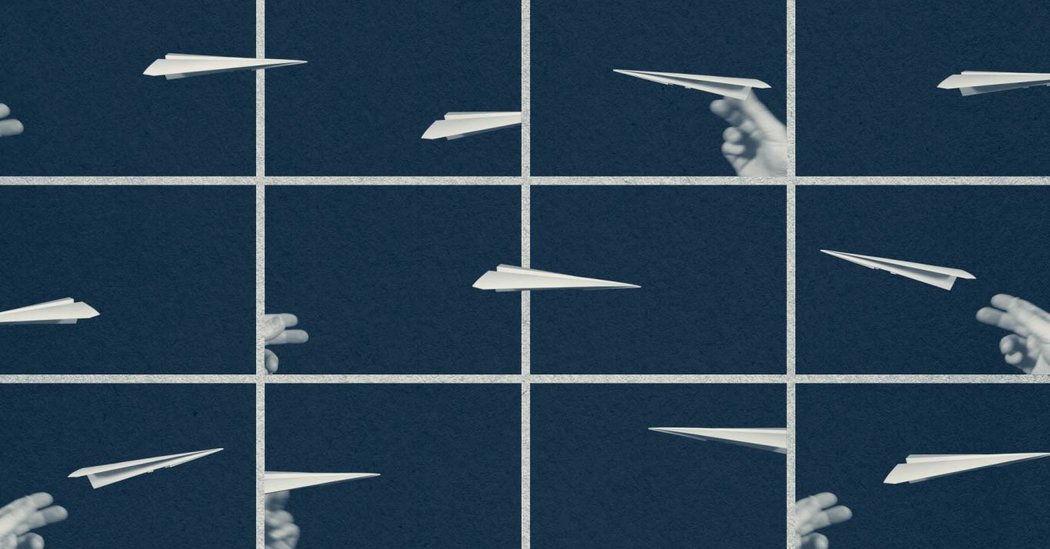 If procrastination isn’t about laziness, then what is it about?

If you’ve ever put off an important task by, say, alphabetizing your spice drawer, you know it wouldn’t be fair to describe yourself as lazy.

After all, alphabetizing requires focus and effort — and hey, maybe you even went the extra mile to wipe down each bottle before putting it back. And it’s not like you’re hanging out with friends or watching Netflix. You’re cleaning — something your parents would be proud of! This isn’t laziness or bad time management. This is procrastination.

If procrastination isn’t about laziness, then what is it about?

“It’s self-harm,” said Dr. Piers Steel, a professor of motivational psychology at the University of Calgary and the author of “The Procrastination Equation: How to Stop Putting Things Off and Start Getting Stuff Done.”

That self-awareness is a key part of why procrastinating makes us feel so rotten. When we procrastinate, we’re not only aware that we’re avoiding the task in question, but also that doing so is probably a bad idea. And yet, we do it anyway.

“This is why we say that procrastination is essentially irrational,” said Dr. Fuschia Sirois, professor of psychology at the University of Sheffield. “It doesn’t make sense to do something you know is going to have negative consequences.”

She added: “People engage in this irrational cycle of chronic procrastination because of an inability to manage negative moods around a task.”

Wait. We procrastinate because of bad moods?

Procrastination isn’t a unique character flaw or a mysterious curse on your ability to manage time, but a way of coping with challenging emotions and negative moods induced by certain tasks — boredom, anxiety, insecurity, frustration, resentment, self-doubt and beyond.

“Procrastination is an emotion regulation problem, not a time management problem,” said Dr. Tim Pychyl, professor of psychology and member of the Procrastination Research Group at Carleton University in Ottawa.

In a 2013 study, Dr. Pychyl and Dr. Sirois found that procrastination can be understood as “the primacy of short-term mood repair … over the longer-term pursuit of intended actions.” Put simply, procrastination is about being more focused on “the immediate urgency of managing negative moods” than getting on with the task, Dr. Sirois said.

The particular nature of our aversion depends on the given task or situation. It may be due to something inherently unpleasant about the task itself — having to clean a dirty bathroom or organizing a long, boring spreadsheet for your boss. But it might also result from deeper feelings related to the task, such as self-doubt, low self-esteem, anxiety or insecurity. Staring at a blank document, you might be thinking, I’m not smart enough to write this. Even if I am, what will people think of it? Writing is so hard. What if I do a bad job?

All of this can lead us to think that putting the document aside and cleaning that spice drawer instead is a pretty good idea.

[Like what you’re reading? Sign up here for the Smarter Living newsletter to get stories like this (and much more!) delivered straight to your inbox every Monday morning.]

But, of course, this only compounds the negative associations we have with the task, and those feelings will still be there whenever we come back to it, along with increased stress and anxiety, feelings of low self-esteem and self-blame.

In fact, there’s an entire body of research dedicated to the ruminative, self-blaming thoughts many of us tend to have in the wake of procrastination, which are known as “procrastinatory cognitions.” The thoughts we have about procrastination typically exacerbate our distress and stress, which contribute to further procrastination, Dr. Sirois said.

But the momentary relief we feel when procrastinating is actually what makes the cycle especially vicious. In the immediate present, putting off a task provides relief — “you’ve been rewarded for procrastinating,” Dr. Sirois said. And we know from basic behaviorism that when we’re rewarded for something, we tend to do it again. This is precisely why procrastination tends not to be a one-off behavior, but a cycle, one that easily becomes a chronic habit.

Over time, chronic procrastination has not only productivity costs, but measurably destructive effects on our mental and physical health, including chronic stress, general psychological distress and low life satisfaction, symptoms of depression and anxiety, poor health behaviors, chronic illness and even hypertension and cardiovascular disease.

But I thought we procrastinate to feel better?

If it seems ironic that we procrastinate to avoid negative feelings, but end up feeling even worse, that’s because it is. And once again, we have evolution to thank.

Procrastination is a perfect example of present bias, our hard-wired tendency to prioritize short-term needs ahead of long-term ones.

“We really weren’t designed to think ahead into the further future because we needed to focus on providing for ourselves in the here and now,” said psychologist Dr. Hal Hershfield, a professor of marketing at the U.C.L.A. Anderson School of Management.

Dr. Hershfield’s research has shown that, on a neural level, we perceive our “future selves” more like strangers than as parts of ourselves. When we procrastinate, parts of our brains actually think that the tasks we’re putting off — and the accompanying negative feelings that await us on the other side — are somebody else’s problem.

To make things worse, we’re even less able to make thoughtful, future-oriented decisions in the midst of stress. When faced with a task that makes us feel anxious or insecure, the amygdala — the “threat detector” part of the brain — perceives that task as a genuine threat, in this case to our self-esteem or well-being. Even if we intellectually recognize that putting off the task will create more stress for ourselves in the future, our brains are still wired to be more concerned with removing the threat in the present. Researchers call this “amygdala hijack.”

Unfortunately, we can’t just tell ourselves to stop procrastinating. And despite the prevalence of “productivity hacks,” focusing on the question of how to get more work done doesn’t address the root cause of procrastination.

O.K. How do we get to the root cause of procrastination?

We must realize that, at its core, procrastination is about emotions, not productivity. The solution doesn’t involve downloading a time management app or learning new strategies for self-control. It has to do with managing our emotions in a new way.

“Our brains are always looking for relative rewards. If we have a habit loop around procrastination but we haven’t found a better reward, our brain is just going to keep doing it over and over until we give it something better to do,” said psychiatrist and neuroscientist Dr. Judson Brewer, Director of Research and Innovation at Brown University’s Mindfulness Center.

To rewire any habit, we have to give our brains what Dr. Brewer called the “Bigger Better Offer” or “B.B.O.”

In the case of procrastination, we have to find a better reward than avoidance — one that can relieve our challenging feelings in the present moment without causing harm to our future selves. The difficulty with breaking the addiction to procrastination in particular is that there is an infinite number of potential substitute actions that would still be forms of procrastination, Dr. Brewer said. That’s why the solution must therefore be internal, and not dependent on anything but ourselves.

One option is to forgive yourself in the moments you procrastinate. In a 2010 study, researchers found that students who were able to forgive themselves for procrastinating when studying for a first exam ended up procrastinating less when studying for their next exam. They concluded that self-forgiveness supported productivity by allowing “the individual to move past their maladaptive behavior and focus on the upcoming examination without the burden of past acts.”

In fact, several studies show that self-compassion supports motivation and personal growth. Not only does it decrease psychological distress, which we now know is a primary culprit for procrastination, it also actively boosts motivation, enhances feelings of self-worth and fosters positive emotions like optimism, wisdom, curiosity and personal initiative. Best of all, self-compassion doesn’t require anything external — just a commitment to meeting your challenges with greater acceptance and kindness rather than rumination and regret.

That may be easier said than done, but try to reframe the task by considering a positive aspect of it. Perhaps you remind yourself of a time you did something similar and it turned out O.K. Or maybe you think about the beneficial outcome of completing the task. What might your boss or partner say when you show them your finished work? How will you feel about yourself?

What are some other, healthier ways to manage the feelings that typically trigger procrastination?

Cultivate curiosity: If you’re feeling tempted to procrastinate, bring your attention to the sensations arising in your mind and body. What feelings are eliciting your temptation? Where do you feel them in your body? What do they remind you of? What happens to the thought of procrastinating as you observe it? Does it intensify? Dissipate? Cause other emotions to arise? How are the sensations in your body shifting as you continue to rest your awareness on them?

Consider the next action: This is different than the age-old advice to break up a task you’re tempted to avoid into bite-sized chunks. According to Dr. Pychyl, focusing only on the “next action” helps calm our nerves, and it allows for what Dr. Pychyl called “a layer of self-deception.” At the start of a given task, you can consider the next action as a mere possibility, as if you were method acting: “What’s the next action I’d take on this if I were going to do it, even though I’m not?” Maybe you would open your email. Or perhaps you would put the date at the top of your document. Don’t wait to be in the mood to do a certain task. “Motivation follows action. Get started, and you’ll find your motivation follows,” Dr. Pychyl said.

Make your temptations more inconvenient: It’s still easier to change our circumstances than ourselves, said Gretchen Rubin, author of “Better Than Before: What I Learned About Making and Breaking Habits.” According to Ms. Rubin, we can take what we know about procrastination and “use it to our advantage” by placing obstacles between ourselves and our temptations to induce a certain degree of frustration or anxiety. If you compulsively check social media, delete those apps from your phone or “give yourself a really complicated password with not just five digits, but 12,” Ms. Rubin said. By doing this, you’re adding friction to the procrastination cycle and making the reward value of your temptation less immediate.

On the other side of the coin, Ms. Rubin also suggested that we make the things we want to do as easy as possible for ourselves. If you want to go to the gym before work but you’re not a morning person, sleep in your exercise clothes. “Try to remove every, every, every roadblock,” Ms. Rubin said.

Still, procrastination is deeply existential, as it raises questions about individual agency and how we want to spend our time as opposed to how we actually do. But it’s also a reminder of our commonality — we’re all vulnerable to painful feelings, and most of us just want to be happy with the choices we make.

Now go finish up alphabetizing that spice drawer before it becomes your next procrastination albatross.

How do I transfer contacts from one Skype account to another?

Why is Information Literacy Important

How do I retrieve pictures sent to me?

star wars – Why did Lando give up his role as Administrator of Cloud City just to side with Leia, Chewie and the Rebellion?