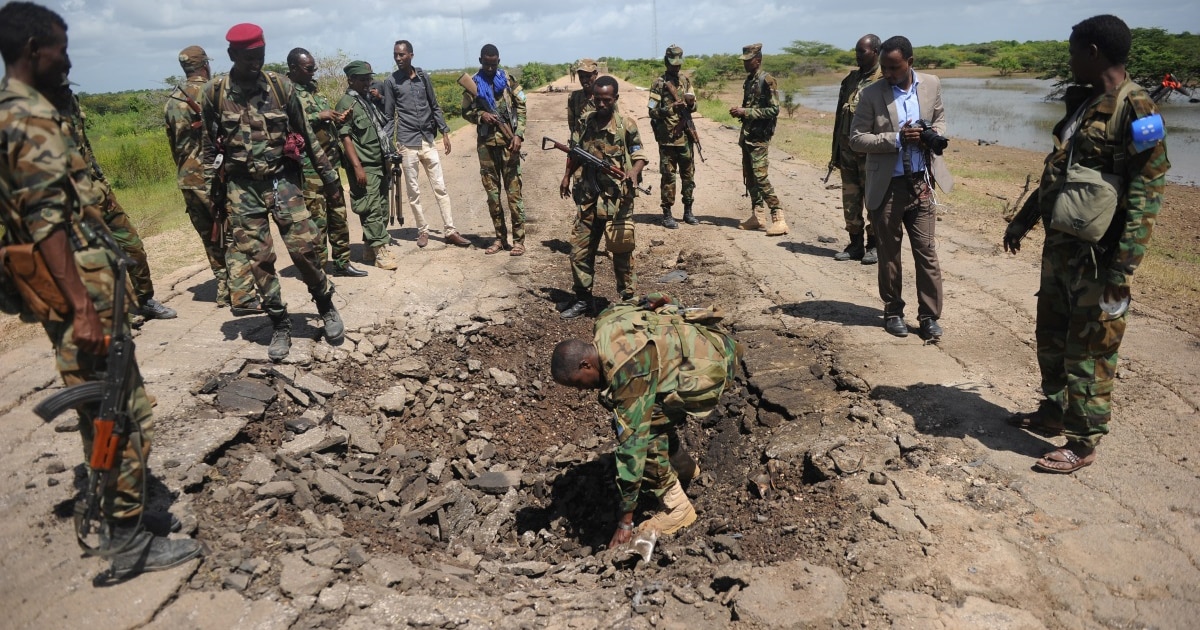 JOHANNESBURG — Even as destroyed U.S. military aircraft smoldered from an al-Shabab attack that killed three Americans this month in Kenya, the al-Qaida-linked group issued a taunting message to African troops: The U.S. will abandon you just as it did the Kurds.

Islamic extremists are already exploiting possible U.S. military cuts in Africa that have caused a rare bipartisan outcry in Washington, with lawmakers stressing the need to counter China and Russia and contain a growing threat from Islamic State group affiliates.

Here’s a look at the issue that has caused alarm among some U.S. security allies, while the U.S. probes the deadliest attack against its military in Africa since 2017.

Worried U.S. partners have pointed out the poor timing of reducing the U.S. military presence: Africa’s extremist groups “set a record pace of activity in 2019” with more than 10,400 killings, a doubling of activity since 2013, the Africa Center for Strategic Studies says in a new report.

The U.S. Africa Command, signaling concern over the Pentagon’s potential cuts, has emphasized the Somalia-based al-Shabab as a threat after its leader in November made an unprecedented call to attack Americans wherever they are.

Neither China nor Russia is doing much to counter Africa’s extremist groups, U.S. Africa Command officials added in a briefing last week.

Get the military’s most comprehensive news and information every morning

By giving us your email, you are opting in to the Early Bird Brief.

The Pentagon’s possible reduction of U.S. troops in Africa is part of a worldwide review by Defense Secretary Mark Esper, who is looking for ways to tighten the focus on China and Russia. It is not known when a decision will be announced, but officials say Esper has made clear the U.S. will not withdraw from Africa entirely.

France, which held a counterterror summit with West African leaders this month, has been blunt about the need for U.S. military support in the Sahel, the region just below the Sahara Desert, as groups linked to al-Qaida and IS move closer to well-populated coastal cities in countries like Ghana and Ivory Coast.

The French are increasing their presence in West Africa against what is now Africa’s most serious extremist threat, this month announcing additional troops for its 4,500-strong operation in the Sahel and last month carrying out its first armed drone strike there.

“If the Americans were to decide to withdraw from Africa, it would be bad news for us. I confirm it,” French President Emmanuel Macron said at the summit. “I hope I can convince President Trump that the fight against terrorism, in which he is deeply engaged, is also at stake in this region.”

In this photo taken April 16, 2018, a U.S. and Niger flag are raised side by side at the base camp for air forces and other personnel supporting the construction of Niger Air Base 201 in Agadez, Niger. (Carley Petesch/AP)

The U.S., in turn, calls the French presence critical in the Sahel, which Secretary of State Mike Pompeo has suggested as the next focus for the global anti-IS coalition.

“The French have more in the Sahel than we have U.S. service members on the entire (African) continent,” Maj. Gen. William Gayler, the U.S. Africa Command director of operations, acknowledged last week. He called for a larger European contribution to support them.

The U.S. has about 5,200 Africa Command personnel, troops and others, on the continent, plus about 800 other Department of Defense personnel.

WHY ARE U.S. LAWMAKERS SPEAKING OUT?

High-profile Republicans and Democrats have warned the Trump administration that cutting the U.S. military presence in Africa would hand over influence on the youthful, booming continent of 1.2 billion people to an assertive China and Russia.

That goes directly against national security strategy, the lawmakers say.

Other lawmakers pointed out the recent establishment of China’s first overseas military base in the Horn of Africa nation of Djibouti — a short distance from the U.S. military’s only permanent base in Africa — as well as growing Russian activity via mercenaries and military cooperation deals.

The presence in Africa of about a dozen extremist groups linked to al-Qaida or IS, including an IS-linked offshoot of Boko Haram in Nigeria, also has raised concern.

“Any withdrawal or reduction would likely result in a surge in violent extremist attacks on the continent and beyond,” senators Lindsey Graham and Chris Coons wrote to the defense secretary last week.

China sends forces to 1st military base abroad, in Djibouti

China on Tuesday dispatched members of its People’s Liberation Army to the Horn of Africa nation of Djibouti to man the rising Asian giant’s first overseas military base, a key part of a wide-ranging expansion of the role of China’s armed forces.

WHAT WAS THAT ABOUT AMERICANS KILLED IN KENYA?

The al-Shabab attack in Kenya slipped largely under the global radar as the U.S. and Iran faced off over the U.S. killing of Iran’s top military commander. But the Jan. 5 attack was notable as al-Shabab’s first against U.S. forces in Kenya, East Africa’s economic hub.

The U.S. on Thursday identified the Americans killed as U.S. Army Spc. Henry J. Mayfield Jr. and U.S. contractors Bruce Triplett and Dustin Harrison. An investigation continues and extra troop protection has been put in place, the statement said, while acknowledging that “the enemy achieved a degree of success in its attack.”

A “very small U.S. force … absolutely repelled the al-Shabab attackers away from the airfield. They did that under fire,” Gayler with the U.S. Africa Command told reporters last week. But the extremist group blared its attack as a propaganda win, releasing images of masked fighters posing next to aircraft in flames.

The U.S. has increasingly targeted al-Shabab in Somalia under Trump, saying it carried out 63 airstrikes against the group last year and killed more than 320 fighters.

But even U.S. officials have expressed concern about another looming military withdrawal that could jolt security in East Africa — the planned pullout of nearly 20,000 African Union forces from Somalia by next year. Somali forces are meant to take over security but are widely seen as not ready.

software industry – Assigned to a buggy, failing project days before it is due

What Is The Pancreas?

This is what I call Random Trophy in DreamBall

Beth Moore Explains Why Your Self-Loathing Is Actually Egocentric

admin - January 3, 2020 0
Call our 24 hours, seven days a week helpline at 800.272.3900 Give the Gift of Hope Our vision is a world without Alzheimer's. Together, we can make that happen. Give your tax-deductible donation today…