After a week of Todd using his MSNBC evening show Meet the Press Daily to assail the senator from Vermont, Bernie Sanders has won—clearly—in New Hampshire. It’s not if Todd hadn’t tried.

On Monday, Todd quoted conservative outlet the Bulwark, characterizing Sanders’s online following as “digital brown shirts,” essentially likening a Jewish politician’s supporters to Nazis. The Friday prior, Todd led a panel in hand-wringing over class warfare against billionaires. He has long had his crosshairs on Sanders. In May, he told the senator “the right will hammer and sickle you to death.” In 2015 after a shooting, he called Sanders, who has a D minus rating from the NRA, “pro-NRA.” And in December, he balked at the idea of refraining from the unjournalistic phrase “Bernie Bros,” asking, “What do we call them, Bernie siblings? Bernie people?” His guest suggested the obvious: “Bernie supporters.”

Of course, Todd is one among many in an anti-Bernie chorus. After the New Hampshire debate last week, his colleague Hardball host Chris Matthews went on a socialism rant, warning of “executions in Central Park” and exclaiming that “I might have been one of the ones getting executed”—perhaps revealing elite pundit anxiety that a growing consciousness about wealth inequality and its enforcers might turn on them. Matthews continued: “I don’t know who Bernie supports over these years, I don’t know what he means by socialism. One week it’s Denmark…Well, what does he think of Castro? That’s a great question.” On Morning Joe, James Carville, the old Clinton strategist, warned: “That’s it. If we go the way of the British Labour Party, if we nominate Jeremy Corbyn, it’s going to be the end of days.” Nevermind that Corbyn is deeply unpopular in the UK, with a net favorability rating of -40 percent according to YouGov polling, while Sanders is America’s most popular politician.

And all of that was just MSNBC.

After the New Hampshire results came in, political reporters and pundits put facts into linguistic pretzels, instead of just stating what the numbers did: That Sanders had won, taking the popular vote for two straight contests in a crowded field. Not all of it was pure ideological offense. New York Times politics reporter Jeremy Peters, tweeted: “Pete, after winning Iowa, is almost beating Bernie in a state Bernie won four years ago by 22 points. Under any normal standard of assessing the Democratic race, Pete would be called a frontrunner.” Likewise, Trip Gabriel also of the New York Times, also asserted an upside-down analysis tweeting, that the number one story of the night was Amy Klobuchar (who came in third) and the number two story of the night was Pete Buttigieg (who came in second) coming closer to Sanders than expected.

Sanders has been a punching bag for the media establishment for some time. In explaining its decision to pass over Sanders to endorse, strangely, both Warren and Klobuchar, the New York Times editorial board wrote “we see little advantage to exchanging one over-promising, divisive figure in Washington for another.” Their competitors have been little different. The Washington Post‘s Dana Milbank and Jennifer Rubin have made Trump-Sanders comparisons a writerly tick. Last April, Milbank said both Sanders has emerged as “the Donald Trump of the left,” citing their “flair for demagoguery” and speeches with “Trumpian flourishes.” Rubin for her part has been banging that drum as daily practice, accusing Sanders in January of “playing Trumpian politics.” As if a politician advocating for healthcare and against student debt somehow equaled Trump’s authoritarian and racist radicalism.

In 2016, the media watch group FAIR found that the Washington Post ran a stunning 16 negative stories on Sanders in just 16 hours. The Sanders campaign collated a string of “misinterpreted” polls, in which Sanders as leader was not the headline story, like the New York Times reporting that Sanders had been “eclipsed by Warren and Buttigieg” in a story about an Iowa poll that had him in first, and five CNN articles about a poll also showing Sanders in the lead which went unmentioned in the headline. Back in November, the Onion parodied the liberal network’s bias: “MSNBC Poll Finds Support For Bernie Sanders Has Plummeted 2 Points Up.” But it might as well have been said about any major outlet.

In consistently undercutting Sanders, news organizations do themselves no favors, also undercutting their own credibility in a time when they sell themselves as a corrective to disinformation (The Washington Post’s slogan is now “Democracy Dies in Darkness,” while the New York Times ran a “The Truth Is Worth It” ad campaign). This pattern of anti-Bernie coverage has spawned conspiracy theories—no assist to truth either. One voter, who says she “watches MSNBC constantly,” in Iowa told Ari Melber that though there were “multiple wonderful candidates who would be great presidents,” she voted for Bernie because she was angry about the “stop-Bernie cynicism” she heard from a number of MSNBC commentators.

While it’s hard to extrapolate broader public sentiments from a single MSNBC viewer, Bernie seems to earn a measure of support beyond his devoted base for unfair media treatment. In the January CNN debate, right after Sanders denied saying that a woman couldn’t be president, moderator Abby Phillips, dismissed it entirely, presenting the other side as truth: “in 2018, you told her you did not believe that a woman could win the election. Why did you say that?” The loaded questioning was torn up on social media, by leftists, conservatives looking to sow division, and moderates too. “He says he didn’t say it. So you turn to Elizabeth Warren and say, ‘Did he say it?’ That’s the issue. I mean, it’s bizarre,” co-host Mike Brzezinski said on Morning Joe the next day.

It is bizarre—the mainstream media’s seeming pattern of anti-Bernie bias. Perhaps, it’s built-in from how top editors staff their sections and producers choose their regular commentators. Among major media outlets, there is only one single democratic socialist (New York Times’ Elizabeth Bruenig), even though 39 percent of Americans have a positive view of socialism, and the Scandinavian-style policies are resoundingly popular. Meanwhile, many outlets feature conservatives and NeverTrumpers (Bret Stephens, Jennifer Rubin, Rick Wilson), a statistically tiny political group: 6 percent of Republicans don’t approve of Trump, according to Gallup. For an ecosystem of reporters whose sources include many donors, lobbyists, and lobbyist-and-donor-funded politicians, the popularity of a democratic socialist is confounding. And the disinterest of editors and producers in representing the views of a rather large movement has made for a giant blind spot about the size of New Hampshire….or Trump in 2016.

Two states in, Sanders, of course, doesn’t have a runaway candidacy. He hasn’t been boosting turnout and shows softness with older voters. The 2020 turnout in Iowa was up only slightly from 2016 but down from 2008, while New Hampshire set a record for turnout but was on par with the past two cycles when accounting for the state’s growing voting-age population. Pundits like to point out that Sanders carried New Hampshire by 60 percent in 2016 when his only opponents were Hillary Clinton (38 percent) and Martin O’Malley (under 1 percent). But Obama, who only won Iowa with 37.4 percent of the vote, lost New Hampshire by 2.6 percentage points in 2008. Heading into more diverse states of Nevada and South Carolina, with something of a tie and a win at his back in a crowded field, Sanders seems only to be growing stronger. After criticism about his white-dominated base, he now leads all candidates in support from voters of color, gaining 10 points from black voters.

What is still impressive is, during our Citizens United era, Sanders’s massive grassroots fundraising donor base, surpassed 5 million donors with an average donation of $18.53, hauling in $34.5 million in the last quarter of 2019, and more than any other campaign. His biggest challenge may not be whether he’s a democratic socialist pushing universal healthcare, but whether a daily barrage of negative media attacks, even when the news is objectively good, can chip away his potential support on the margins in a few vital states.

And if Sanders does manage to win without corporate PAC money or the $2 billion in earned media showered on Trump, well, that would certainly be a story.

Correction: An earlier version of this story misstated New Hampshire turnout—it was on par with previous elections cycles taking into account more eligible voters, not below 2008 numbers like Iowa. 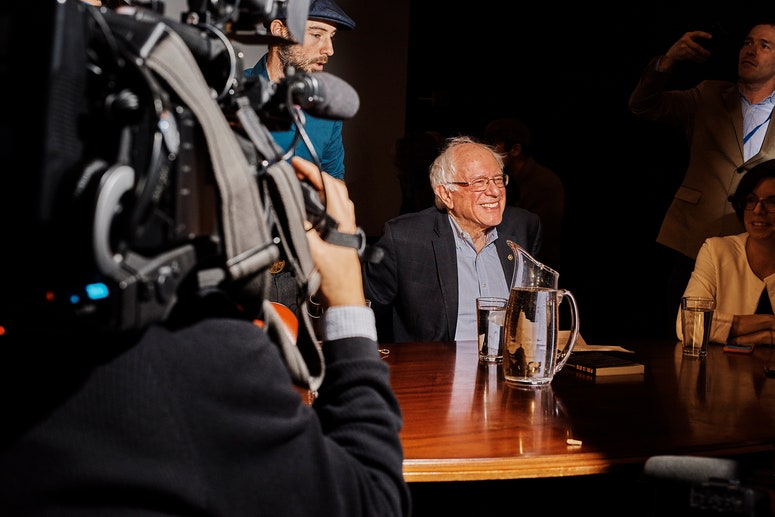 What We Do | Careers

How I use the iPad as a serious writing system

What local forecasters are saying about the predicted snow, Jan. 7-8, 2020

What is Python? Executive Summary

“I choose a lazy person to do a hard job. Becaus…”

How to Pick Server Services That Are Right for Your App?

Why I Read the Authorized King James Version

Why Sientra Is Flying High Today

Why Do Noise Canceling Headphones Hurt My Ears?