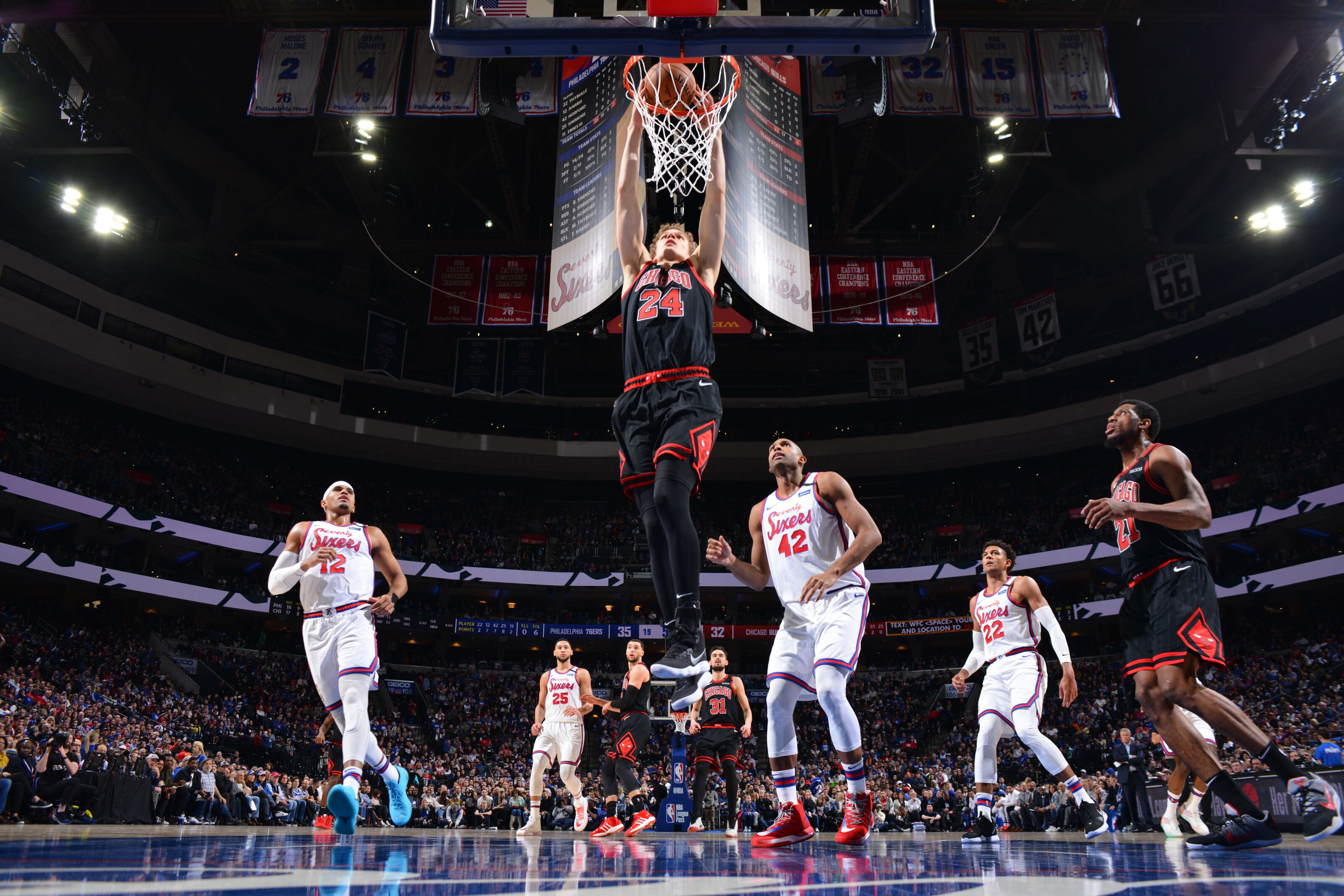 PHILADELPHIA, PA – JANUARY 17: Lauri Markkanen #24 of the Chicago Bulls dunks the ball against the Philadelphia 76ers on January 17, 2020 at the Wells Fargo Center in Philadelphia, Pennsylvania NOTE TO USER: User expressly acknowledges and agrees that, by downloading and/or using this Photograph, user is consenting to the terms and conditions of the Getty Images License Agreement. Mandatory Copyright Notice: Copyright 2020 NBAE (Photo by Jesse D. Garrabrant/NBAE via Getty Images)

In the Chicago Bulls’ lone nationally televised broadcast on Friday night, big man Lauri Markkanen pulled a bit of a disappearing act in a loss against the Joel Embiid-less Philadelphia 76ers.

Here’s a look at why big man Lauri Markkanen is not the Chicago Bulls‘ No. 2 option, despite the small sample size of brilliance he showed during his first two seasons in the league.

I don’t believe anyone can argue with the fact that it’s important for stars to shine when they are showcased in a nationally televised broadcast. During Friday night’s game against the shorthanded 76ers, Markkanen didn’t live up to the expectations. In fact, he pulled a bit of a disappearing act.

All season long, Markkanen has shown a bit of regression. It doesn’t help when Markkanen provides big man Luke Kornet with the opportunity to attempt more shots by the game’s end. This cannot happen if Markkanen is supposed to be the Bulls’ No. 2 option. Unfortunately, this has become an all too common trend this season.

You read that, right?

The Bulls clearly have some problems, but Zach LaVine is not one. As much as I’d like to jump on the Markkanen bandwagon, I can’t let myself do it. He’s supposed to be the Robin to LaVine’s Batman, but it’s not happening. I hate excuses, and I feel like that’s all Markkanen is doing.

It’s become apparent that Markkanen may not be the answer to the Bulls’ struggles, if his performance during the 2019-2020 season means anything. This is not to say that Markkanen couldn’t be one of the cornerstones to the Bulls’ rebuild. I hope he can turn things around reinventing himself as the next Dirk Nowitzki.

Another problem to note is the coaching, or lack thereof. The multi-ball handler system the Bulls are trying to implement sounds great on paper, but it’s not materializing the way many would like.

It’s obvious that head coach Jim Boylen doesn’t appear to make a good fit for the Bulls and its young, developing core. I don’t believe he’s ever gotten the buy-in from the players after what transpired last season in a Dec. 8 meeting with the Boston Celtics. During that game, Boylen utilized a wholesale lineup change twice trying to send a message to the team. I don’t believe the trust and buy-in will develop as long as he’s the head coach, unless the Bulls qualify for the playoffs this season.

This is not to say that Markkanen is off the hook. He needs to be more aggressive. If Markkanen wants more touches and more minutes, he needs to make it clear to both his teammates and the coaching staff, much like LaVine did the night he went off for 49 points in a Nov. 23 game against the Charlotte Hornets. This might sound like a lot to ask of Markkanen. He’s not the type of star to demand the ball is what some may argue.

The problem is if Markkanen is supposed to be one of two main alpha dogs the way many believe he can be, he needs to step it up and at least act like it–even if it’s only for 30-35 minutes each game. That means Markkanen needs to run the floor, attack the rim, get in the paint, take advantage of mismatches in the post and stop floating so much around the perimeter waiting for three-point shots.

If Markkanen can’t be the No. 2 option, he needs to make better use of the touches and minutes he gets. This would help the team tremendously. It does the Bulls no good giving Markkanen more touches and more minutes if he can’t maximize the opportunities he’s already getting.

It’s also worth mentioning how this is a big year for Markkanen. He’s supposed to enter contract extension talks with the Bulls, but how those negotiations will go remains unclear. If the number’s right, I suppose the Bulls can give Markkanen another shot and another season to prove he’s the No. 2 option. Beyond that, I’m not certain what the future holds for Markkanen and the Bulls. All I know is if Markkanen doesn’t turn it around soon, it might begin to be too little too late.

ISS sightings over your city | Spot The Station

Job 38:19 Where is the way to the home of light? Do you know where darkness resides,

Why a potential STAR change is causing angst: ‘It’s already a nightmare’

Association of Plasma Concentration of Vitamin B12 With All-Cause Mortality in the General Population in the Netherlands | Complementary and Alternative Medicine | JAMA...

admin - January 7, 2020 0
Cyrus Garvin, a Freedman, built the GARVIN HOUSE on the property of what might have been his former owner Joseph Baynard. Baynard’s house was burned down during the Union attack on Bluffton on June 4, 1863, and the GARVIN HOUSE stands on the exact location where the residence had been located, on…