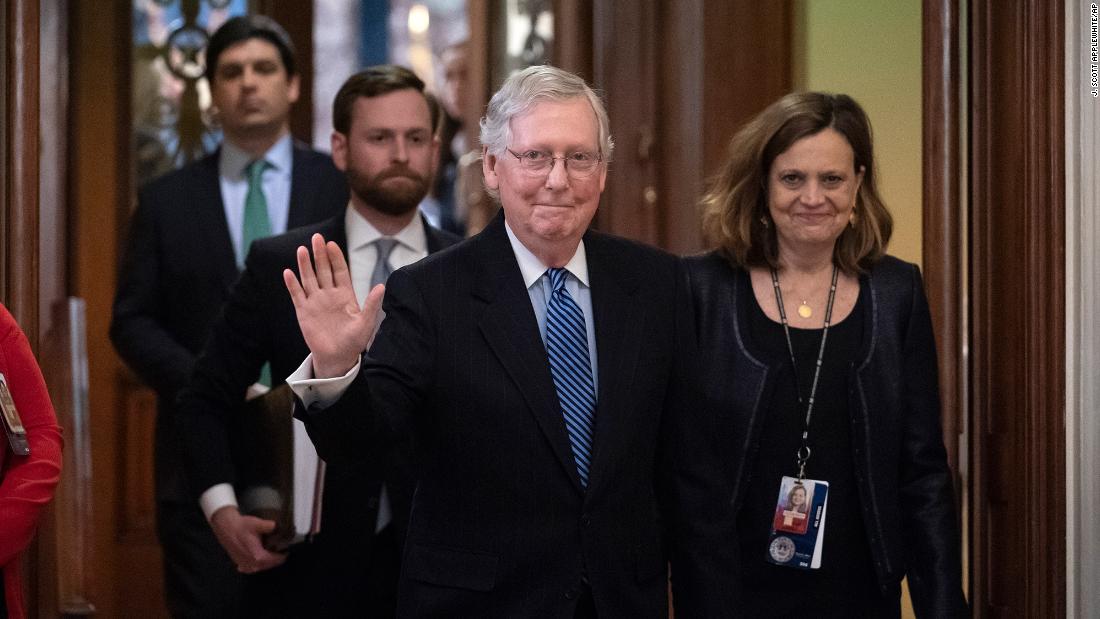 (CNN)Majority Leader Mitch McConnell cracked a joke during a Tuesday lunch with his Republican colleagues that the previous two weeks had been like a family vacation that had gone on too long.

Members were spent, tensions high and patience with their colleagues across the aisle had been hovering around an all-time low. Still, GOP Sen. Mike Rounds of South Dakota said McConnell’s message Tuesday afternoon — just one day before the President

— was that a real break from Washington may help to begin repairing the relationships that had been tested.

It was a moment of levity, Rounds recalled in what had been an exhausting two weeks.

For Republicans, the closing of the impeachment trial marks a welcome end and a victory. Asked where the Senate needed to go from this moment on, Sen. Richard Burr, a North Carolina Republican and the chairman of the Senate Intelligence Committee, piped in to a group of reporters: “Home.”

The President was acquitted and all

but one Republican member

followed McConnell’s lead. But, there is no deflecting the toll the trial took on the Senate. Unlike in 1999 at the end of the Clinton impeachment, there was no hug shared between the leaders. It will fall to rank-and-file members to repair what was broken.

“At some point we need to be serious about not just reflecting the division in the country, but trying to heal it. I was struck at the comments tonight by the two leaders — McConnell and (Senate Minority Leader Chuck) Schumer– that they were almost mirror opposites about what happened,” Sen. Chris Coons, a Democrat from Delaware, told CNN. “It’s up to us … neither our President nor our leadership are going to do it. We have to do it.”

When lawmakers return next week, they will pivot back to nominations, and many members argue there are a series of legislative proposals that are ripe for bipartisan agreement including infrastructure, a transportation bill, an energy bill and efforts to lower prescription drug prices.

“I hope there will be a return to normalcy, that people will put their spears down. Let’s get back to work,” said South Dakota Sen. John Thune, the Republican whip. “It’s an election season I get that and that will be spirited too, but I think both sides have things to get done they want to take to the voters.”

Republicans and Democrats said the State of the Union —

— had provided a brief respite of what could be accomplished in the wake of impeachment. The senators all dined together, giving members an opportunity to catch up after what had previously been several days stuck in the chamber on their respective sides of the aisle.

“Before the State of the Union, we were talking about how we could come together and how we could get things done. A lot of relationships have been deeply strained, but I think we can come together,” Sen. Richard Blumenthal, a Democrat from Connecticut, told CNN.

Sen. James Lankford, a Republican from Oklahoma, emphasized that on the outside it might appear like impeachment had overtaken the chamber, but internally, he said there was a great sense of relief that it was coming to an end after months of waiting for the House to finish their investigation.

“We have all seen this coming for the last three months. On September 24 when Speaker Pelosi announced impeachment, we all assumed that Speaker Pelosi wouldn’t have started it unless she already knew she had the votes,” Lankford said. “My guess is there is less angst in Washington, DC, than there is in the rest of the country because we’ve all known where this was going.”

In fact, many members CNN spoke with pointed out that impeachment — while trying — had been less toxic than the

. Still, Democrats argued it had been difficult to watch so many of the colleagues they’d worked across the aisle with vote against something like witnesses.

“This institution is broken,” Colorado Democratic Sen. Michael Bennet told CNN. “More than 50% of the senators have said what the President did was wrong. If that is your view, I don’t see how you can possibly vote for evidence. I don’t know how we move on because this is part of a pattern of the Senate destroying itself under Mitch McConnell’s leadership.”

How long coronaviruses may linger on contaminated surfaces, according to science

How They Are Named: differently in different parts of the world

aircraft identification – What is this quad-jet plane at El Paso Airport?

How do I ask a good question? – Help Center

admin - December 30, 2019 0
If you find this page to be useful, please support it. If you are a webmaster, consider adding a link to this location. Thanx. This flash animation should help you learn how the Hiragana is written. Each sign…