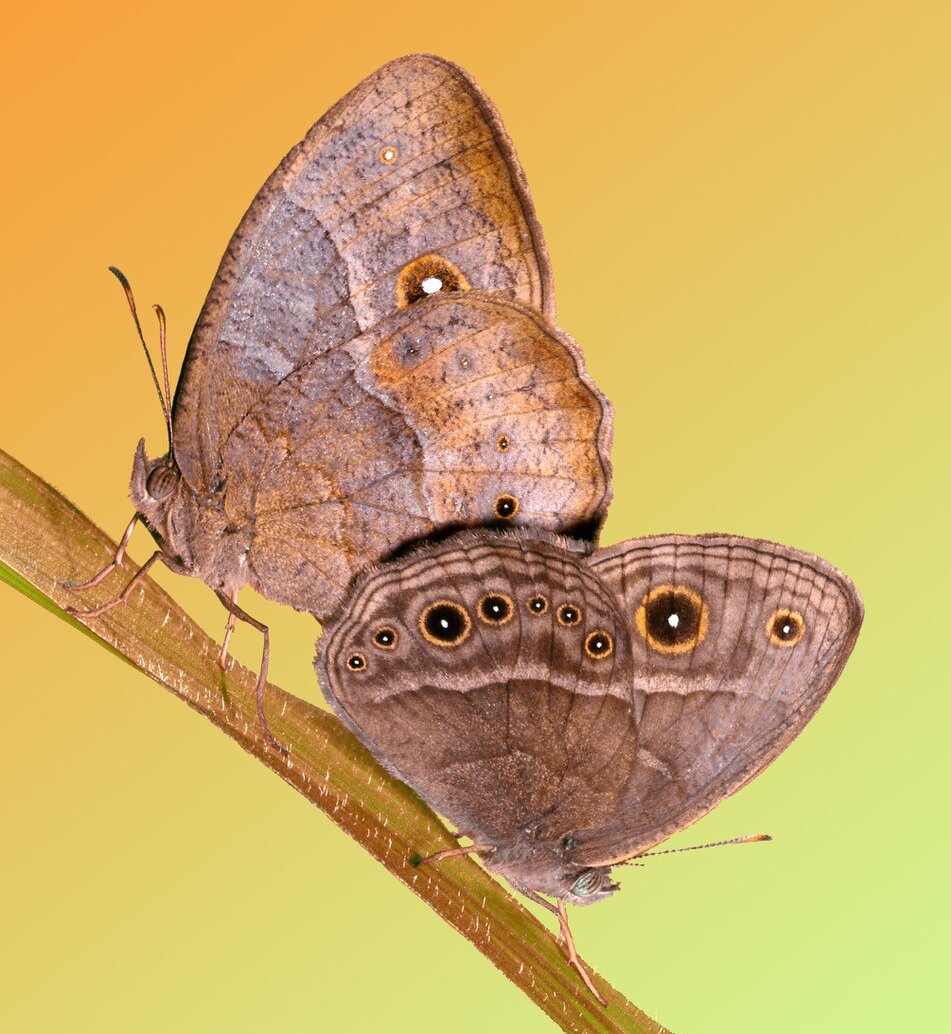 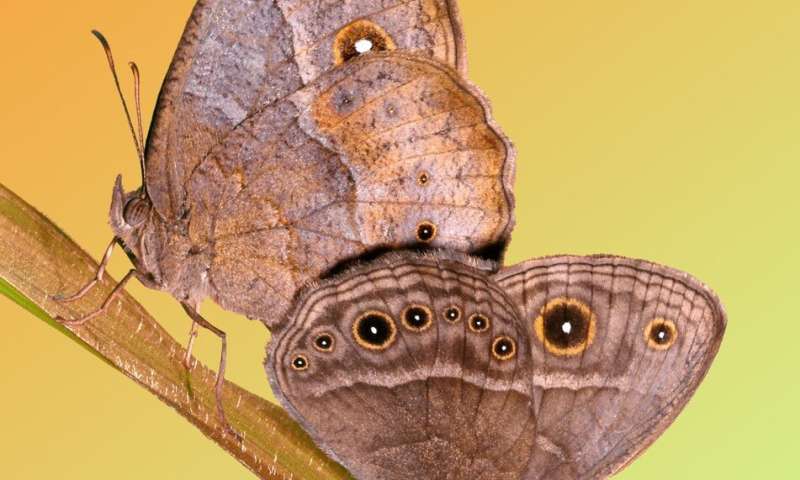 The striking contrast in the size of the eyespots of two B. anynana butterflies that developed during different seasons. Credit: William Piel and Antónia Monteiro (CC BY 4.0)

New insight on how a butterfly species developed the ability to adjust its wing eyespot size in response to temperature has been published today in eLife.

The study reveals that the African satyrid butterfly Bicyclus anynana (B. anynana), a member of the sub-family of the nymphalidae (or ‘brush-footed’) butterflies, changes its eyespot size using a complex physiological and molecular response that evolved gradually over millions of years. The findings also highlight that while temperature modulates hormone levels in various species of satyrid butterfly, B. anynana is just one of a few that take advantage of this response to regulate eyespot size.

Many butterflies in the nymphalidae family have circular eyespot patterns on their wings that are typically used to deflect attacks from predators. However, in certain seasons, such as the dry season in Africa, the butterflies’ best survival strategy is to avoid drawing attention to themselves, and they will shrink the size of their eyespots to make them look like a dead leaf.

How butterflies accomplish this feat has only been studied in one species of African satyrid, B. anynana. In this species, low temperatures that signal the arrival of the dry season lower the quantity of a hormone called 20E during the late larval stage. This alters the function of hormone-sensitive cells in the centre of the eyespots and subsequently shrinks their size.

“For our study, we investigated how this hormone-mediated system came to regulate the size of eyespots by examining the process in several other species of butterflies with and without eyespots,” explains lead author Shivam Bhardwaj, who conducted this work as part of his doctoral research in the Department of Biological Sciences at the National University of Singapore (NUS), and who is now a postdoctoral fellow at Mississippi State University. “We wanted to find out which other species change their eyespot size in response to temperature and whether they achieve this through the same mechanism as B. anynana. This comparative work would allow us to explore for the first time how a temperature-regulated system evolves at the genetic and physiological level.”

To do this, Bhardwaj and his team reared 13 different species of satyrid at two different temperatures. They found that all species had lower levels of the 20E hormone in response to low temperatures, but most of them were unable to change the size of their eyespots accordingly. This included species that are known to have different eyespot sizes during wet and dry seasons. “We also saw that a small group of species expressed the hormone receptor in their eyespot centres just like B. anynana, but this also was also not sufficient to shrink its size,” says Bhardwaj.

The team then manipulated the 20E hormone in four of the 13 species, and found that B. anynana is the only one to have evolved a temperature and hormone-mediated system of eyespot size regulation. They suggest that this species gradually evolved the ability to change its eyespot size according to temperature as a result of seasonal variations in its natural African habitat.

Further studies are now needed to understand the different environmental cues that other butterflies use to alter the size of their eyespots during dry and wet seasons.

“For now, our work uncovers a complex, gradual adaptation to seasonal environments in B. anynana that required specific mutations to evolve,” says senior author Antónia Monteiro, Associate Professor at NUS and at Yale-NUS College, Singapore. “If other forms of adaptation are as difficult to evolve as the one identified in B. anynana, then our findings support a previous warning that many species may be vulnerable to extinction in the face of unpredictable and fluctuating temperatures caused by climate change.”

Citation: How some butterflies developed the ability to change their eyespot size (2020, February 11) retrieved 12 February 2020 from https://phys.org/news/2020-02-butterflies-ability-eyespot-size.html

This document is subject to copyright. Apart from any fair dealing for the purpose of private study or research, no part may be reproduced without the written permission. The content is provided for information purposes only.

How long coronaviruses may linger on contaminated surfaces, according to science

Two popes — one retired, one reigning — cause a furor

logic – Why do I accept some inconsequential claims as “obviously true” without evidence? E.g. “Most people don’t like to be hit on the...

California’s IoT cybersecurity bill: What it gets right and wrong

Get directions and show routes – Computer

How to choose the right Windows 10 release channel

admin - February 16, 2020 0
Windows 10 tips Individual users and IT administrators alike are confused by the options Microsoft offers for Windows 10 updates. Here’s help choosing the best update method for yourself or your business. Computerworld / Thinkstock Once upon a time, making a choice about how you updated Windows was easy: Let Microsoft decide. The company had…