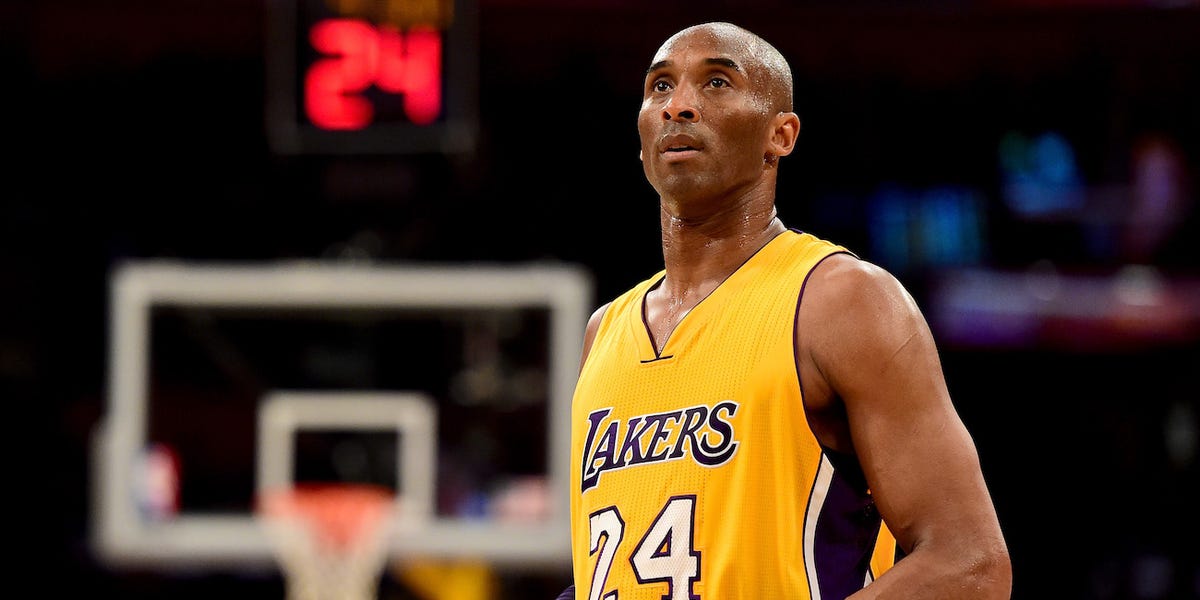 A select few in the sports world are so well-known to go by one name. Kobe was one of them.

Kobe Bryant was one of nine killed in a helicopter crash in Calabasas, California, on Sunday at 41 years old. He leaves behind a legacy as an all-time great NBA player, one of the biggest sports icons of the 20th century, and an image almost shrouded in mythology.

From the moment he entered the NBA, Bryant had a platform to become a transcendent star. Not every player arrives under such circumstances.

The Lakers drafted Kobe Bryant with the 13th pick in the 1996 draft. Susan Sterner/AP He entered the NBA in 1996, during the peak of the high-school-to-pros craze. He was a teenage phenom from Philadelphia who spent part of his childhood overseas, spoke Italian, and was said to be destroying fellow draft prospects in pre-draft workouts in 1996.

He famously pushed his way to the Los Angeles Lakers in the draft and joined a team on the rise built around Shaquille O’Neal. Suddenly, one of the buzziest young players in years was in one of the country’s biggest media markets.

Bryant played second fiddle to O’Neal early in his career, but he was able to develop into a star in his own right under a bright spotlight.

Though O’Neal was the anchor to those Lakers teams that won three straight championships, Bryant was the more aesthetically pleasing player to watch. Lanky and hyper-athletic, Bryant was the Lakers’ perimeter threat, a player liable to drive the lane and dunk or hit a pull-up jump shot at any moment. He became the most exciting player to watch on a team that became the face of the NBA following Michael Jordan’s retirement.

In time, the pecking order between Bryant and O’Neal flipped.

A mirror image of Jordan

Kobe Bryant emulated Michael Jordan during his NBA career. Photo by VINCENT LAFORET/AFP/Getty Images One of the reasons Bryant was such a beloved and admired player is because he emulated the player widely regarded as the best player in NBA history: Michael Jordan.

The similarities were impossible to miss — both were thin, athletic 6-foot-6 shooting guards. Bryant studied Jordan and his footwork. In an early-career matchup with Jordan, Bryant even sought Jordan’s advice on how to shoot fade-away jumpers.

Like Jordan, Bryant could attack opponents in many different ways. Early in his career, he could blow past opponents and score at the rim.

Later, as age and NBA miles caught up to him, Bryant’s footwork and ability to hit tough, contested shots became the staple of his game.

Jordan once said Bryant could beat him in a game of one-on-one because Bryant copied all of his moves.

Style matters in the NBA. All baskets count the same, but not all shots are created equally. Fans tend to flock to players who can create their own shot, smoothly scoring in a variety of ways, regardless of defense. Like Jordan, it became hard to look away when Bryant had the ball.

Over 20 years in the NBA, Bryant built one of the more impressive resumés.

He won three straight titles with O’Neal and the Lakers, but perhaps more importantly to his legacy, he succeeded without O’Neal.

The post-O’Neal Lakers were a crucial part of Bryant’s time in the NBA. The Lakers fell out of title contention, winning an average of 40 games from 2004-05 to 2006-07. However, Bryant flourished, averaging 31.5 points, 5.6 rebounds, and 5.3 assists per game during that span and asserting himself as one of the league’s most dominant forces.

Kobe Bryant led the league in scoring in 2005-06 and 2006-07. Lisa Blumenfeld/Getty Images Some players are criticized for failing to lead teams to great heights by themselves — Bryant received almost the opposite. Fans, analysts, and other players excused Bryant for not leading a rag-tag Lakers squads on deep playoff runs.

Of course, it helped that Bryant got to the mountain top again. The Lakers rebuilt over time, getting Bryant the help he needed. He won his lone MVP in 2007-08 and led the Lakers to three straight Finals, winning championships in 2008-09 and 2009-10.

In total, he won five titles, one shy of Jordan’s six. He was an 18-time All-Star, making it 17 consecutive years. He was a 15-time All-NBA First Team member and a 12-time member of the All-Defensive team. He holds several NBA records today and is permanently etched into the league’s history. Just as importantly, he did it all with one team.

Part of Bryant’s mass appeal was his “Black Mamba” persona and “Mamba Mentality.” Bryant created the persona after settling a civil suit over sexual assault allegations out of court in 2005, the lowest point of his public life.

Though Bryant’s popularity dipped and sponsors dropped him following the allegations, the persona of ruthlessness and hard work resonated with fans.

Over the years, Bryant became known for a relentless work ethic, as almost mythological stories of endless early-morning and late-night workout sessions made their way around the NBA. In the process, Bryant also waxed philosophical about leadership, success, and failure, creating a larger-than-life image of a player who would never be out-worked and would always get back up.

Bryant, at times, literally did just that. He once played through a game left-handed because he injured his right shoulder.

He tore his Achilles tendon in 2013, and famously stayed in to shoot free throws. He even tried to continue playing before the Lakers pulled him from the game.

Like many legendary athletes, Bryant’s career didn’t end in grand fashion. He was a shell of himself after coming back from so many injuries, and slugged through high-usage, inefficient seasons, often to the detriment of his team in his final two seasons. The Lakers won 21 and 17 games in 2014-15 and 2015-16, Bryant’s last season in the league.

Nonetheless, Bryant treated fans to one last grand finale, scoring 60 points on 50 shots in a wild spectacle on his final game of the season.

In a way, it encapsulated Bryant’s entire career — an all-time skilled player, with notable flaws, but an image and flare for the dramatic that elevated him to greater heights in the sports world. There is a reason why when we shoot, we yell, “Kobe!”

An Inquiry into the Nature and Causes of the Wealth of Nations (Cannan ed.), in 2 vols.

white grubs – Phyllophaga and other species

How Do You Like Me Now? Achievement in PAYDAY 2

” Do It Anyway” (The Prayer Foundation).

How do you do hyperparameter searches in ML?

admin - January 5, 2020 0
Change your Yahoo password or reset a forgotten passwordChange your password from a web browserYou can use a web browser on your computer or mobile device.Go to Account Info page.Click Menu icon Image of the mobile web version.Click Account Security.Click Change password.Enter and confirm your new password.Click Continue.To know more information regarding below mentioned topics,…