In ‘The Problem’ section, a simple background of the location of Indonesia in relation to the location of particular natural disaster hot spots such as the ‘Ring of Fire’ and ‘Alpide Belt’ was given. In this section, we will go deeper into explaining how these hot spots are the direct result of different types of plate tectonics and plate boundaries that make up the Earth’s outer shell and thus explain the role of plate tectonics in causing damage to Indonesia.

Plate tectonics is a theory which suggests that Earth’s outer shell is divided into several plates which hover over the mantle, the stony inner layer above the core. The reason for plate tectonics moving is due to the convection in the mantle, where hot material near the Earth’s core rises and colder mantle rock sinks. The movement forms three types of tectonic boundaries which affect Indonesia which are convergent plates which move into each other, divergent plates which move apart and transform plates which slide past each other horizontally.

Figure 2.1: This a physical map showing Indonesia lying in complex convergence between the Indian- Australian, Eurasian, Caroline and Philippine Sea Plates. There are many many active volcanoes along the Java and Bali region as well as between Sulawesi and the Philippines Trench. The Sunda arc is a product of the Eurasian plates and Indian Ocean, extending through Java, Andaman Islands and Sumatera and westward from Sumba. The merging between the Indian Ocean and Eurasian plates is happening along the Java trench at a rate of 6cm per year. The arrows shown indicate the movement of the plates, with the Philippine Sea Plate moving in an easterly direction and the Indo-Australian Plate moving northerly. 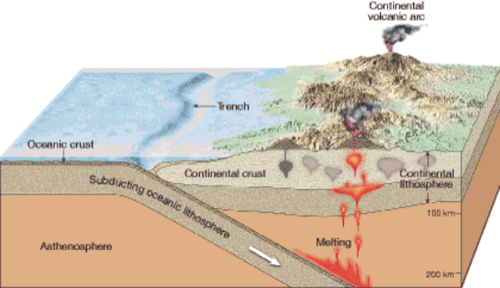 Figure 2.2: This diagram shows the process of converging boundaries. From the diagram, we see that the oceanic lithosphere subducts in the asthenosphere. During this process the plate melts and rise through the continental lithosphere, where the forces are pushing apart. As the plate reaches the top a continental volcanic arc is formed which has probably taken million of years.
Source: http://whs-marinebio.wikispaces.com/Plate+Tectonics

Convergent boundaries form when an oceanic plate goes under a landmass. As a result, the edge of the continental plate may fold to form a mountain range, while the oceanic plate subducts and the rock which melts in the Earth’s hot interior may cause earthquakes on its way up and finally forming volcanic eruptions as it reaches the surface. The bend between the oceanic plate and the continental plate tends to form a trench. With all the pressure, folding and bending the plates undergo, the break and slip in the plates cause earthquakes.

The Krakatoa eruption was an example of convergent plates, where the volcano erupted due to the subduction of the Indo-Australian tectonic plate as it moved northwards towards Asia. A subduction zone is the area where two tectonic plates converge, where one bends and slides under the other, going down the mantle, a layer under the crust. With Krakatoa approximately 9km long and 5km wide, the initial eruption at 12:53pm sent debris and gas 24km into the air. The explosion parted the magma chamber allowing the seawater to contact hot lava. This event is known as a phreatomagmatic event and as a result, extremely hot steam carried the pyroclastic flows up to 40km at speeds greater than 100km/h. The severity of the eruption is further proved by the fact that it was given a rating of 6 on the Volcanic Explosion Index which uses the volume of pyroclastic flows, height and duration of the volcano to perceive the impact of the volcano. Furthermore, dawn did not return for three days and an approximate 45km^3 of debris was released into the sky. 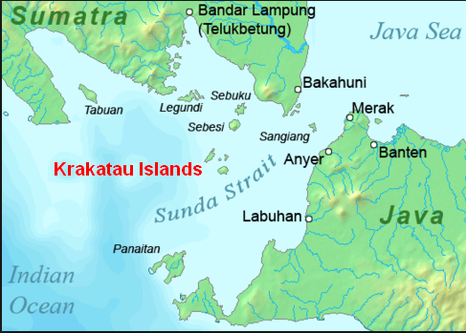 Figure 2.3: This is a physical map showing Krakatoa’s location in the Sunda Strait between Java and Sumatra in Indonesia and is also part of the Indonesian Island Arc. The Krakatoa Volcano eruption in 1883 took place in Bandar Lampung westerly of the Java Sea.
Source: http://www.krakatau-ecotour.com/ 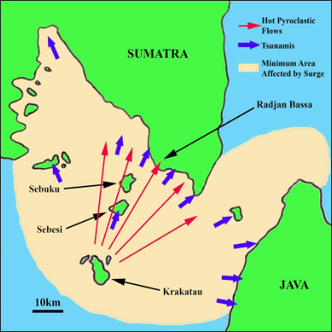 Figure 2.4: This thematic map shows the area affected by the Krakatoa volcano (indicated in pale), as well as the direction of the spread of both the tsunami (indicated in blue) and hot pyroclastic flows (indicated in red). We see that the tsunamis have spread thoroughly, reaching well into the mainland of Sumatra. The pyroclastic flows, however are more contained and have a more direct affect to those right in right of the volcano.

A transform boundary is where two tectonic plates slide past each other horizontally, thus creating stress when parts of these plates gets stuck at areas where they touch and the rest of the plates continue to move. The stress causes the rock to break or slip meaning they suddenly lurch the plates forward and cause earthquakes. These areas of breakage are called faults, with the majority of Earth’s faults found along the transform boundaries in the Ring of Fire.

The Sumatran Fault is a strike-slip fault which extends the entire length of Sumatra and coincides geographically with the volcanic arc. The fault is heavily segmented, with most segments less than 100km long. The importance of these short segments are that they limit the area that can be affected by one event, and magnitudes tend to be limited to 7.5 or less. The mountains of Sumatra form a long, straight line which although are fertile and highly populated valleys, predominantly sit on the fault and damaging earthquakes cause severe damage. Earthquake activity around Sumatra has multiple sources including thrust earthquakes on the subduction fault, strike-slip earthquakes on the Sumatran fault, volcanic earthquakes and deeper earthquakes within the subducting lithosphere. 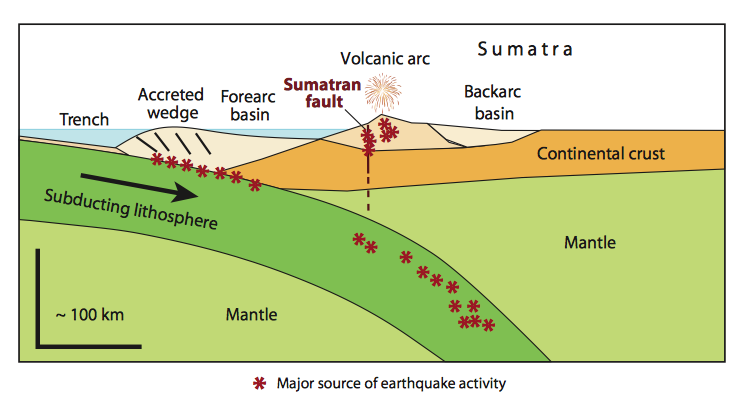 Figure 2.5: This is a schematic cross-section of the Sumatran plate boundary which shows the major source of earthquake activity which is marked with asterisks. The depth of the fault is approximately 100km, and the primary cause for the fault and earthquakes which occur on it is due to the subducting lithosphere into the mantle. This process is similar to converging plate boundaries, with a forearm and backarc basin forming on either side of the volcanic arc.
Source: http://www.virtualuppermantle.info/Merapi.htm

A subduction zone marks the collision between two tectonic plates which move slowly across the surface of Earth over millions of years. When two tectonic plates meet at a subduction zone, one bends and goes under the other towards the mantle, the hotter layer beneath the crust. Since subduction zones have huge boundaries, they generate very large earthquakes as the crust may stick together in some places gathering energy which is released in the earthquake. Subduction zones also cause tsunamis as they are usually located near coastlines. Tsunamis are triggered after an earthquake when the sea floor suddenly moves, due to the magnitude of the earthquake. Thirdly, subduction zones can also cause volcanoes as when the tectonic plate slides below the mantle, heating releases fluids such as carbon dioxide and seawater which rise into the upper plate partially melt the crust on top forming magma, which causes volcanoes.

Figure 2.6: This is a block-diagram replicating a cross- section showing an example of a subduction zone between the Indo-Australia plate tectonic (left) which dives under the Eurasian plate (right). As the lithospheric mantle creates a subduction zone as it disappears into the mantle, we see the pressure is forcing magma up towards the surface of the continental crust, which is what happens during the eruptions of volcanoes caused by a subduction zone. Furthermore, between Sumatra and the Indo-Australian Plate, a mid-ocean ridge has formed, which is due to the convection currents which rise in the mantle.
Source: http://www.earthobservatory.sg/news/sinabung-erupting-volcano-630km-singapore#.VbTnI_mqqko

When the Indo-Australian plate reaches a depth larger than 100km, the water it contains lowers the fusion point of the surrounding rocks, creating magma. This magma is hotter and less dense than the rocks around and therefore begin to rise towards the surface, where it begins to form subduction zones. The Sumatran chain of volcanoes is more or less always at an approximate distance of 300km from the trench, which is the surface limit between the Eurasian and Indo-Australian plates.

11 Parents on Why They Cut Ties With Grandma and Grandpa

How to Lose Weight Well

How to Delete Usage History of Windows apps in Windows 10

‎Not Overthinking: How to get rich (without getting lucky)

word choice – What is the name of the symbols ““?

‘Rebel Without a Cause’ star Sal Mineo was ‘on a good...

admin - January 9, 2020 0
When Michael Gregg Michaud published his biography on Sal Mineo in 2010, he had no idea that some of the late actor’s living relatives would finally come forward.The author’s book, titled “Sal Mineo: A Biography,” was adapted into a 2011 film directed by James Franco titled “Sal.” The former teen idol, who was nominated for…